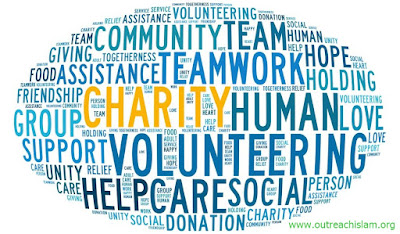 In the Name of Allah Most Merciful Most Beneficent
Peace and Blessings of Allah be Upon the Prophet Muhammad, his Noble family and companions

Charity is one of the five pillars of Islam.
As it is said:

On the authority of Abdullah, the son of Umar ibn al-Khattab (ra), who said:
I heard the Messenger of Allah (ﷺ) say, "Islam has been built on five [pillars]: testifying that there is no deity worthy of worship except Allah and that Muhammad is the Messenger of Allah, establishing the salah (prayer), paying the zakat (obligatory charity), making the hajj (pilgrimage) to the House, and fasting in Ramadhan." [Bukhari & Muslim] 40 Hadith Nawawi 3

Quran mentions charity next to the prayers and describes prayers without charity is vain worship!

Quran 2:3  Who believe in the unseen, establish prayer, and spend out of what We have provided for them,
Quran 2:43 And establish prayer and give zakah and bow with those who bow [in worship and obedience].

Quran 5:55 Verily, your Wali (Protector or Helper) is Allah, His Messenger, and the believers, - those who perform As-Salat (Iqamat-as-Salat), and give Zakat, and they bow down (submit themselves with obedience to Allah in prayer).

Quran 9:103 Take, [O, Muhammad], from their wealth a charity by which you purify them and cause them increase, and invoke [Allah 's blessings] upon them. Indeed, your invocations are reassurance for them. And Allah is Hearing and Knowing.

Some people  who are experts in bigotry may misunderstand that Prophet (s) is taking people's money as charity for himself and exploiting their wealth . But that is not the case. Prophet (s) and his family are forbidden to consume charitable money!

AHLUL BAYTH (FAMILY OF THE PROPHET PEACE AND BLESSINGS OF ALLAH BE UPON HIM) IS FORBIDDEN TO COLLECT ZAKAH/SADAQAH:

"They ask you (O Muhammad) what they should spend in charity. Say: 'Whatever you spend with a good heart, give it to parents, relatives, orphans, the helpless, and travellers in need. Whatever good you do, God is aware of it.'" - The Holy Quran 2:215

The Prophet Muhammad (peace be upon him) said: "The believer's shade on the Day of Resurrection will be his charity." - Al-Tirmidhi, Hadith 604

The Prophet also said: "Every act of goodness is charity." - Sahih Muslim, Hadith 496

On the authority of Abu Hurairah, who said: The messenger of Allah said :
"Each person's every joint must perform a charity every day the sun comes up : to act justly between two people is a charity; to help a man with his mount, lifting him onto it or hoisting up his belongings onto it is a charity: a good word is a charity, every step you take to prayers is a charity and removing a harmful thing from the road is a charity."

related by Bukhari and Muslim.~ IMAM NAWAWI 40 HADITH, NO:25
The Prophet Muhammad (peace and blessings of Allah be upon him) said: "Charity is prescribed for each descendant of Adam every day the sun rises." He was then asked: "From what do we give charity every day?" The Prophet answered: "The doors of goodness are many...enjoining good, forbidding evil, removing harm from the road, listening to the deaf, leading the blind, guiding one to the object of his need, hurrying with the strength of one's legs to one in sorrow who is asking for help, and supporting the feeble with the strength of one's arms--all of these are charity prescribed for you." He also said: "Your smile for your brother is charity." - Fiqh-us-Sunnah, Volume 3, Number 98

The Prophet Muhammad (peace and blessings of Allah be upon him) said: "Save yourself from hellfire by giving even half a date-fruit in charity." - Sahih Al-Bukhari, Volume 2, Hadith 498