Islamic tradition of seeking blessings from the holy relics

December 06, 2019
In the Name of Allah Most Merciful Most Beneficent
Peace and Blessings of Allah be upon the Prophet Muhammad, his noble family and companions.

SEEKING BLESSINGS FROM THE HOLY RELICS:BELIEF OF SAHABI V/S BELIEF OF MISGUIDED SECTS:

There are many Hadiths in Bukhari and other major collections, the Sahaba preserved holy hair of the Prophet Muahmmad alaihiswalathu wa salam. If honoring Prophet’s belongings is shirk, then how do salafis define, honoring the Black stone (Hajar Al Aswad)???

It was authentically reported in the Hadith narrated by Abu Juhayfah in the two Sahih (Authentic) Books of Hadith that during the Farewell Pilgrimage, when Bilal stepped out with what was left of the Prophet’s ablution water, the Sahabah (Companions of the Prophet) rushed to take it; some of them took a little of it and others took much.

Narrated Ibn Sirrn (R.A) : I said to 'Ablda, "I have some of the hair of the prophet (Peace and Blessings of Allah be upon him) which I got from Anas or from his family." 'Abida replied. "No doubt if I had a single hair of that it would have been dearer to me than the whole world and whatever is in it." (Sahih Bukhari,Book 4, Hadith 171)

Comments: An authentic Hadith which may refute strayed wahhabi priests. This salafi groups who reject the holy relics , they are speaking high about Sanad! I would like to ask this misguided and misleading ones, can this salafis and their followers produce a Sanad for their aqeedha (belief) that can be traced all the way back to the Prophet Salla Allahu alaihi Wa Sallam through an existing unbroken Sanad?. this ignorant ones claim to be following Salaf, what is their Sanad which we can trace back to the time of Salaf?. If you followers of this heretics do not have proofs, then get back to the Original Ahlu Sunna wal Jamah creed! the Main Body- Ottoman Creed.

The Messenger of Allah (Peace and blessings of Allah Be upon him) said: "......The scarf on her (the woman of paradise) head is better than the world and what is in it" (Sahih)
Jami At-Tirmidhi 1651, Darussalam Publishers.

Comments: This Hadith explains the virtues of those who died in the cause of Allah. If the scarf of a woman of paradise is better than everything in this world, then how much greater would be the value of the belongings of the pious servants of Allah in the sight of Allah and His Messenger alaihiswalathu wa Salam!?

So be intelligent, nobody Worshipping graves or hair or sandals, but giving high honour and respect for this things which belongs to a beloved of Allah and pious Muslims.

Belief of Some misguided sects in Islam: Taking blessings from holy relics is shirk (polytheism) and bidha (innovation) !

So it is now the time for those who are fooled by misguided sects, to renew their Shahada (testimony of faith) and come back to the correct Islam (the Main body, the way of the Ottoman creed)

To follow the truthful way and to disassociate from liars and false preachers is obligatory on every Muslim!

It is said:  Quran 17:36 And do not pursue that of which you have no knowledge. Indeed, the hearing, the sight and the heart - about all those [one] will be questioned.

Quran 53:28 And they have thereof no knowledge. They follow not except assumption, and indeed, assumption avails not against the truth at all.

Quran 9:119 O you who have believed, fear Allah and be with those who are true.

So when you continue to follow the liars you are disobeying Allah's command to be with those who are true!
Peace be upon the Prophets of Allah
Praise be to ALLAH the LORD of whole creations.

*Outreachislam.org aims to defend the truth and resist the falsehood which is spread by the agents of Antichrist . By reading sharing and subscribing us, you are committed to the resistance against falsehood and earns Allah's Favor in abundance . 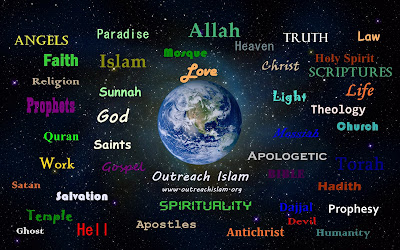