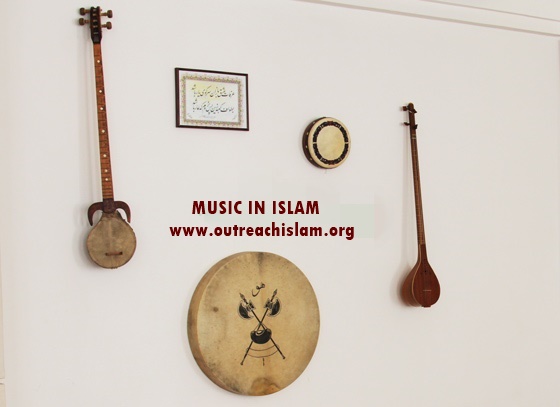 HADITH ON USING MUSICAL INSTRUMENTS FOR ZIKR NASHEED AND NAAT:
AND PERMISSION TO RECITE MAWLID AND POEMS OF /ABOUT PIOUS ONES/HISTORICAL EVENTS ETC

We are opening this Blog Page "OutreachIslam.org" with a celebration and written music in it and poem. As any real time celebration comes with some poems, music and singing!

The Enemies of the pious and main body of Islam accuse Muslim majority for using music!. They says music is haram (forbidden) and bidha (innovation) in Islam. However, their attack against Sufis (Muslim saints) and Ahlu Sunna Wal Jamah (Main body) is coming from their hypocrisy and double standard!

Islam forbid playing music when it is used to invoke the desires of the flesh and to invite to forbidden actions as you see in the western and film musics!

But on the other hand Islam permit music when it used in Islamic celebrations while remembering Allah Almighty and making prayer circles .

Islam prohibited music and songs that does not comply with the principles of Islam.
Below are the Hadith references for using Music in Islamic environment.
It was narrated that A'isha (Radiyallahu Ta'ala Anha) said: "Abu Bakar (Radiyallahu Anhu) entered upon me ,and there were two girls from the Ansar with me, singing about what the Ansar used to sing about the Day of 'Bu'ath'. She said: "And they they were not really singers."
Abu Bakar (Radiyallahu Anhu) said: "The wind instruments of Satan in the house of the Prophet (SallaAllahu alaihi Wa Sallam)?. That was on the day of 'Eid' (Al Fithr). But the Prophet (Salla Allahu alaihi Wa Sallam) said: "O Abu Bakar, every people has its festival and this is our festival". (Sahih)
Reference: Sunan Ibn Majah Vol-3 Page 90 Hadith 1898,Darussalam Publishers.

Note: Bu'ath was a place about two miles from Al Madinah where on that day before Islam, a battle took place between the Ansar tribe and tribe of Aus and Khazraj.
We see that Ansar used to commemorate (Urs) the major events in the life of their ancestors.

PERMISSION TO USE MUSICAL INSTRUMENTS AND SINGING :
It was Narrated from Muhammad bin Hatib that Messenger of Allah (SallAllahu Alaihi wa Sallam) said :"What differentiate between the lawful and unlawful is (beating) the Duff and raising the voices (in song) at the time of marriage " (Hasan) Sunan Ibn Majah [Arabic-english ], Vol 3, Hadith 1896, Page 89.Darussalam publications, Saudi Arabia.

Comments by the Translators: Beating Duff on the occasion of weddings serves the purpose that all the people will know about marriage. Songs,poetry etc, may also be sung at this occasion so long as it's wording is not contrary to the teachings of the Shari'ah; and only the young girls, who are not adult, are allowed to do so. This type of entertainment is allowed during the Eid days too.

Verdict: This hadiths refute misguided and strayed sects attack on Ahlu Sunna wal Jamah and Sufi people using musical instruments and singing in the Zikr. Also, there is no prohibition or restrictions on which instrument is allowed which is prohibited. Those days only duff and drums were available, people today use electrical instruments, aren't people using electronic Quran and sound instruments today?.
So wake up people of misguidance!

It was narrated from Anas bin Malik that the Prophet (SallaAllahu alaihi wa Sallam) passed by some part of Al -Madinah and saw some girls beating their Duff and singing,
"We are girls from Banu Najjar
What an excellent neighbour is Muhammad"
The Prophet (SallaAllahu alaihi Wa Sallam) said: "Allah knows that you are dear to me" (Sahih) Sunan Ibn Majah 1899, Darussalam Publishers ,Saudi Arabia (Wahabi Publishers)

COMMEMORATION OF SPECIAL DAYS (BADR URS/ASHURA ETC WITH RECITING HISTORICAL POEMS)
It was narrated that Abu Hussain , whose name was Khalid Al-Madani,said:"We were in Al Madinah on the day of Ashura,and the girls were beating Duff and singing. We entered upon Ruba'i bint Mu'awwidh and mentioned that to her. She said: "the Messenger of Allah (SallaAllahu alaihi Wa Sallam) entered upon me on the morning of my wedding, and there were two girls with me who were singing and mentioning the qualities of my forefathers who were killed on the day of Badr. One of the thing they were saying was: "Among us there is a Prophet who knows what will happen tomorrow." He (Prophet Salla Allahu alaihi wa Sallam) said: "Do not say this, for no one knows what will happen tomorrow except Allah" (Sahih), Sunna Ibn Majah 1897

Comments: In Sufi Paths (traditional Islam), it is still a traditions to sing and commemorate the life of Prophet alaihiswalathu wa salam, Sahaba ,ahlul bayth and pious Imams and scholars.
These methods has a heritage and it is used as a means to keep the History and biography of Islam and Muslims alive, especially in the days when there is no abundance of paper or other methods to keep the History available to next generation, they preserved it through songs and poems and commemorated anniversaries.

Those who say this practice is Bidha and Haram, yet they run to some universities of Yahudis and secularists for a Degree of Islam and write their own books and CDs to preach Islam, must be ashamed of accusing old traditional practices!

The Hadiths support that the practice of Urs (Commemoration of the martyrs and Saints) allowed.
In this Hadith , Prophet SallaAllahu alaihi Wasallam) prohibit saying: "The Prophet knows what happen tomorrow"

Abdullah bin Rawahah was walking infront of the Prophet Muhammad alaihiswalathu wa Salam and and reciting poetry during Umratul-Qada.
Umar said to him: O ibn Rawahah! In front of the Messenger of Allah (alaihiswalathu wa salam) and in the sanctuary of Allah, the mighty and Sublime, you recite poetry?".The Prophet (peace and blessings of Allah be upon him) said: Let him do so, for what he saying is more effective than shooting arrows at them" (grade: Hasan)
Sunan Nasai, Vol 3 Page 538, Hadith 2876.
Darussalam Publishers, Saudi Arabia Also in Tirmidhi, Ibn Hibban

We can see that there is no Bidha in reciting poetry in Islam, in holy Harmain or other places of worship. So leave the sects and leaders that are liars and follow those who are truthful (see Quran 9:119).

Conclusion:
We can see that, Music is allowed in Islam when it is used in religious ceremonies ,marriages, Islamic festivals, Dhikr gatherings etc!
We also see that Music is forbidden when it is used to incite lust ,earthly passions and to make attraction between men and women!. Even, we see that those who attack Sufis for using Music during Dhikr (Zikr) , those people (new sects/false tawheed groups) use music in their TV channels , for promoting their events and video trailers! They even use Hollywood film clips to promote "End of Time" subject based Dawah programs!.

You can see youtube videos of Peace TV. Huda TV etc using music in their trailers and programs. The false scholars who accuse Sufis for using Music, you can see their Youtube End of Times (Doomsday) Islamic lectures filled with music and Hollywood movie clips!

Seek the Sufi traditional Islamic Way, which is the only correct Path without any hypocrisy and double-standard!

Quran 2:256  There shall be no compulsion in [acceptance of] the religion. The right course has become clear from the wrong. So whoever disbelieves in Taghut and believes in Allah has grasped the most trustworthy handhold with no break in it. And Allah is Hearing and Knowing.

In the end of Times, we are living it now, is the time of confusion and tribulations. Antichrist and his party will bring forth confusions among Muslims and non-Muslims against traditional Islamic way.

So We at outreachislam.org aims to dismantle the work of Dajjal (Antichrist) and defend the Truth

Peace be upon the Prophets of Allah, praise be to Allah the LORD of all Creations