January 06, 2020
In the Name of Allah Most Merciful Most Beneficent
Peace and Blessings of Allah be upon the Prophet Muhammad his Noble Family and Companions and those who followed Him (Nabi) in excellence.

Quoting the words from the letters of Paul, Christians claim that Paul of Taurus saw Jesus Christ (Peace and Blessings of Allah be upon him) and received Revelation from him!. Is this claim true?
Let's analyse what the Bible says!. I was about to refute "Al Fadi" CIRA Missionaries and Sam Shamoun, but the Pentecostal Pastor came up with this verse from Galatians and it opened up an inspiration in my heart to write some words on this topic before proceeding to Al Fadi's so called "Tawheed Dilemma", So 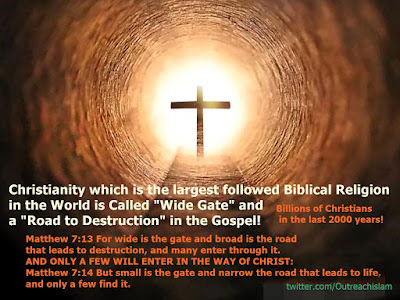 The Bible, except Pauline books testifies no!. People sometimes argue that, other Apostles accepted Paul and his work was praised by the disciples!. This is however illogical!. Because, this words says:

1- The elect will be deceived! Paul and disciples had severe disagreements and they realised his false teachings!
Matthew 24:24 NASB For false Christs and false prophets will arise and will show great signs and wonders, so as to mislead, if possible, even the elect.

2- Paul make purification rites in the Temple
Acts 21:26 Then Paul took the men, and the next day, purifying himself along with them, went into the temple giving notice of the completion of the days of purification, until the sacrifice was offered for each one of them.

3- John warns about the spirits of antichrists appearing in their times. Paul confess he had one of them!

Zechariah 13:2 “And on that day,” says the LORD of Heaven’s Armies, “I will erase idol worship throughout the land, so that even the names of the idols will be forgotten. I will remove from the land both the false prophets and the spirit of impurity that came with them.

But the False Spirit in Paul was Not Removed!

2 Corinthians 12:8 Concerning this I implored the Lord three times that it might leave me.And He has said to me, "My grace is sufficient for you, for power is perfected in weakness." Most gladly, therefore, I will rather boast about my weaknesses, so that the power of Christ may dwell in me.

This also prove that it is not the LORD of Israel who inspired Paul!. Even Christ came to remove impure spirits from the people make them holy! But Paul was not made holy. The spirit of impurity , remained in Paul!

DID PAUL SAW JESUS CHRIST (PEACE BE UPON HIM):

Acts 26:15-16 "And I said, 'Who are You, Lord?' And the Lord said, 'I am Jesus whom you are persecuting.'But get up and stand on your feet; for this purpose I have appeared to you, to appoint you a minister and a witness not only to the things which you have seen, but also to the things in which I will appear to you;

Galatians 1:12 I received my message from no human source, and no one taught me. Instead, I received it by direct revelation from Jesus Christ.

The Gospel of John (16:6-9) prove that, Jesus Christ will not teach anyone , but the Holy Spirit would be send to the 12  disciples.

Not even John said, he received Revelation directly from Christ!

WHAT JESUS CHRIST SAYS ACCORDING TO THE GOSPELS:
None of the disciples said, they saw Jesus Christ after his ascension to heavens!
Mark 13:31 Heaven and earth will pass away, but my words will never pass away.

John 16:10 NASB and concerning righteousness, because I go to the Father and you no longer see Me;

John 16:20 NIV Very truly I tell you, you will weep and mourn while the world rejoices. You will grieve, but your grief will turn to joy.

Christ says that the unbelieving world will rejoice and believers will grieve!. If Christ was dying to save the world, then the believers must be rejoicing, and unbelievers must be mourning!. This words prove the doctrine of Crucifixion is not true!. Later, they will have joy, because they will realise that Jesus was not crucified!

Ezekiel 13:3 NASB 'Thus says the Lord GOD, "Woe to the foolish prophets who are following their own spirit and have seen nothing.

Jeremiah 28:15 Then the prophet Jeremiah said to the prophet Hananiah, "Listen, Hananiah! The LORD did not send you, but you have persuaded this people to trust in a lie.

Lamentations 2:14 The visions of your prophets were empty and deceptive; they did not expose your guilt to ward off your captivity. The oracles they saw for you were empty and misleading.

CHRIST SAYS THAT THE ADVOCATE WILL TEACH EVERYTHING:

John 14:26 But the Advocate, the Holy Spirit, whom the Father will send in my name, will teach you all things and will remind you of everything I have said to you.

John 16:7 But very truly I tell you, it is for your good that I am going away. Unless I go away, the Advocate will not come to you; but if I go, I will send him to you.

And are you saying, Jesus Christ came to Paul while the Advocate was sent to the disciples!?

This verses clearly prove that Paul was not sent by Christ!

When Paul was on the road to Damascus he saw a light and heard a voice. Did those who were with him hear the voice?

Did the voice spell out on the spot what Paul’s duties were to be?

2 Thessalonians 2:7 For the secret power of lawlessness is already at work; but the one who now holds it back will continue to do so till he is taken out of the way.

Matthew 7:22-23 ESV On that day many will say to me, ‘Lord, Lord, did we not prophesy in your name, and cast out demons in your name, and do many mighty works in your name?’ And then will I declare to them, ‘I never knew you; depart from me, you workers of lawlessness.’

Romans 1:25 NLT They traded the truth about God for a lie. So they worshiped (spelling errors in the Bible) and served the things God created instead of the Creator himself, who is worthy of eternal praise! Amen.